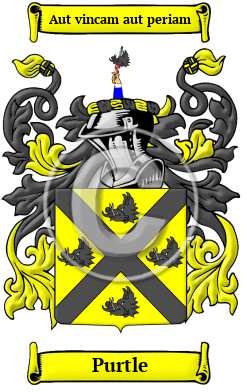 Although the Irish had their own system of hereditary surnames and the Strongbow settlers brought with them their own Anglo-Norman naming practices, the two traditions generally worked well together. The name Purtle is an occupational surname, a form of hereditary name that existed in both cultures long before the invaders arrived, but more common to the Anglo-Norman culture. Occupational surnames were derived from a word describing the actual job done by the original name bearer. Early Strongbownian names of this type often used the prefix le, meaning the, in French, but the use of this prefix did not last in the language of the vernacular. The surname Purtle came from a common occupational name for a swineherd. The surname Purtle is derived from the Norman-French word porcel, which in turn comes from the Latin word porcus, which means pig or piglet. Occupational names such as Purtle frequently were derived from the principal object associated with the activity of the original bearer, such as tools or products. These types of occupational surnames are called metonymic surnames. The Gaelic form of the surname Purtle is Puirséil.

Early Origins of the Purtle family

The surname Purtle was first found in Surrey, England and later in County Tipperary. As many Norman families, they accompanied Strongbow in the Anglo- Norman invasion of Ireland in 1172. The English branch in Surrey continued their stronghold in Surrey for many years. As far as the Irish branch is concerned, it is generally believed that Sir Hugh Purcell, a Strongbow knight was the progenitor of the family in Ireland. His grandson, another Sir Hugh married Beatrix, daughter of Theobald FitzWalter, Chief Butler of Ireland about 1204 and received Loghmoe (Loughmore,) a village in North Tipperary as a wedding present. [1] A direct line of the family continued until 1722 with the death of Nicholas Purcell, 13th Baron of Loughmoe.

Early History of the Purtle family

Notable amongst the family up to this time was John Purcell (died 1665), Welsh politician who sat in the House of Commons from 1660 to 1665; Henry Purcell (1659-1695), generally considered England's greatest composer of the Baroque era; his younger brother Daniel Purcell (1664-1717) was...
Another 44 words (3 lines of text) are included under the topic Early Purtle Notables in all our PDF Extended History products and printed products wherever possible.

Migration of the Purtle family

During the middle of the 19th century, Irish families often experienced extreme poverty and racial discrimination in their own homeland under English rule. Record numbers died of disease and starvation and many others, deciding against such a fate, boarded ships bound for North America. The largest influx of Irish settlers occurred with Great Potato Famine of the late 1840s. Unfortunately, many of those Irish that arrived in Canada or the United States still experienced economic and racial discrimination. Although often maligned, these Irish people were essential to the rapid development of these countries because they provided the cheap labor required for the many canals, roads, railways, and other projects required for strong national infrastructures. Eventually the Irish went on to make contributions in the less backbreaking and more intellectual arenas of commerce, education, and the arts. Research early immigration and passenger lists revealed many early immigrants bearing the name Purtle: Joseph Purcel, who settled at Barstable in Massachusetts in 1822; Nancy Purcell and her husband and seven children settled in Quebec in 1825; Andrew, Edward, James, John, Martin, Mathew, Michael, Patrick, Peter Purcell all arrived in Philadelphia between 1840 and 1870..