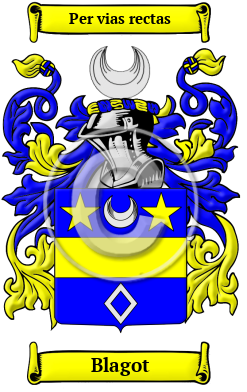 In ancient Scotland, Blagot was a Strathclyde-Briton name for someone who lived in Ayrshire, but interestingly, the name Blagot may also be derived from the Old English words blaec, which means black, and wudu, which means wood, and indicates that the original bearer lived near a dark, wooded area.

Early Origins of the Blagot family

The surname Blagot was first found in Ayrshire (Gaelic: Siorrachd Inbhir Àir), formerly a county in the southwestern Strathclyde region of Scotland, that today makes up the Council Areas of South, East, and North Ayrshire, where they held a family seat from ancient times.

One of the first records of the family was of Robert Blakwode, a native of Scotland, who was discharged from prison in London as he was unjustly arrested in 1384. Later, Andrew Blackwud, was bailie of Perth in 1532 and Adam Blackwood was one of the Privy Council of Mary Queen of Scots. [1]

Early History of the Blagot family

Prior to the first dictionaries, scribes spelled words according to sound. This, and the fact that Scottish names were repeatedly translated from Gaelic to English and back, contributed to the enormous number of spelling variations in Scottish names. Blagot has been spelled Blackwood, Blackwode, Blakewood, Blaikwood, Blackewood and many more.

Notable amongst the family at this time was Adam Blackwood (1539-1613), Scottish writer having descended from a family in good circumstances, and was born at Dunfermline in 1539. "His father, William Blackwood, was slain in battle before the son reached his tenth year, and his mother did not long survive the loss of her...
Another 53 words (4 lines of text) are included under the topic Early Blagot Notables in all our PDF Extended History products and printed products wherever possible.

Migration of the Blagot family to Ireland

Some of the Blagot family moved to Ireland, but this topic is not covered in this excerpt.
Another 80 words (6 lines of text) about their life in Ireland is included in all our PDF Extended History products and printed products wherever possible.

Migration of the Blagot family

In such difficult times, the difficulties of raising the money to cross the Atlantic to North America did not seem so large compared to the problems of keeping a family together in Scotland. It was a journey well worth the cost, since it was rewarded with land and freedom the Scots could not find at home. The American War of Independence solidified that freedom, and many of those settlers went on to play important parts in the forging of a great nation. Among them: the Blackwoods who settled in Swain's Island, Newfoundland, and moved to the mainland to Bona Vista Bay in the early 19th century; Ebenezer Blackwood settled in Bona Vista in 1826.